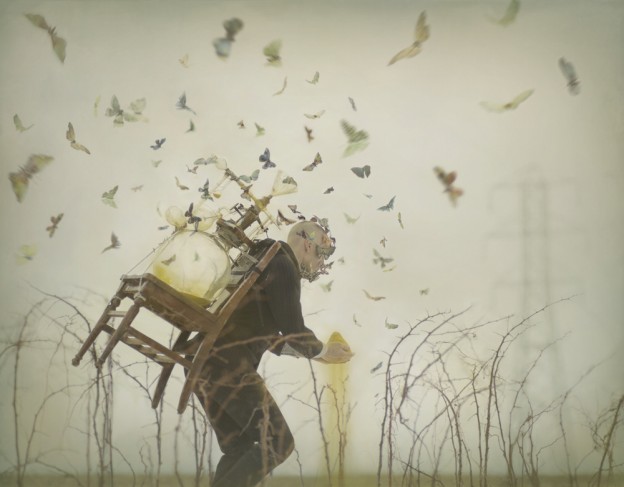 On a macrocosmic scale, all is determined (as all is as it ought, TAO, Our Lady Babalon, the unconscious mind, etc.) but on the microcosmic scale, we make decisions every moment by constricting this flow. This, being the relationship of the Beast and of Babalon.

Liber Aleph. 57. DE NECESSITATE VOLUNTATIS. (On the Necessity of the Will)

And how then (sayest thou) shall I reconcile this Art Magick with that Way of the Tao which achieveth all Things by doing nothing? But this have I already declared to thee in Part, showing that thou canst do no Magick save it be thy Nature to do Magick and so the true Nothing for thee. For to do nothing signifieth to interfere with nothing so that for a Magician to do no Magick is to commit Violence on himself. Yet learn also that all Action is in some sense Magick, being an essential Part of that Great Magical Work which we call Nature. Then thou hast no free Will? Verily, thou hast said. Yet nevertheless it is thy necessary Destiny to act with that free Will. Thou canst do nothing save in accordance with that true Nature of thine and of all Things, and every Phenomenon is the Resultant of the Totality of Forces; Amen. Then thou needest take no Thought and make no Effort? Thou sayest sooth; yet, art thou not compelled to Thought and Effort in the Way of Nature? Yea, I, thy Father, work for thee solicitously, and also I laugh at thy Perplexities; for so was it foreordained that I should do, by Me, from the Beginning.

Turtles All the Way Down:
If billiard ball A strikes billiard ball B with a certain velocity, mass, and angle of impact, and the frictional characteristics of the surface they are both supported by are specified, then certain things are knowable:

In other words, in non-living systems, there is a conservation of energy—a pattern apparently universally present. Contrast this with an analogous interaction in living systems. If I specify for you the starting position, velocity, mass, and angle and point of contact of my foot and my dog. Spirit, you will not be able to predict much. It’s not even obvious that my foot will end up on the end of my leg as opposed to ending up in Spirit’s mouth some distance away from the rest of my leg. To distinguish this non-conservative interaction—the typical one in living systems—from its counterpart in the physical world, Bateson referred to this as collateral energy.

Or again, his brilliant insight that both Darwin and Lamark were correct—Darwin’s evolutionary contracts fit adequately the presently known world of biological forms and Lamark’s evolutionary constructs are the drivers in the cultural world of ideas—is another example of his steadfast insistence that different patterns were operating in the physical world and the world of mind. While Bateson was unwavering in his perception that the patterns and laws which specify the structure of the world of mind and the physical were distinct, he never proposed a mechanism to explain how this difference came about. Bateson’s thesis itself is strongly supported by a contemporary of his—the man usually considered the leading physicist of the 20th century.

John: There are profound differences between the living and nonliving systems. One of the differences is given by the fact that the second law of thermodynamics—conservation of energy—applies absolutely unequivocally, no exceptions known at this moment, in the world of mechanical nonliving systems. So the basic unit in which you can inventory a mechanical system is energy, in the physical sense of energy—not the Santa Cruzian sense of energy . . .
Judy; . . . that’s cosmic energy; that’s something else . . .

John: It’s definitely something else. But in the case of living systems… So if I kick my dog two things occur. At the level of the physical body John and the physical body Spirit, my dog, when I kick my dog she will actually physically move and the first part other movement, unless she sees me coming, will be absolutely predictable by the laws of physics. That is, there is a certain amount of energy I put into the kick, a certain amount is received, there’s friction at the interface and her body moves a certain distance . . .

John; . . . and where does the unpredictability come from?
Judy: From the fact that you don’t know which way Spirit’s going to run. And not only that, the conservation of energy is violated. Dogs always move further that the kick would move them. (Laughter)

John; Too true. If I kick the ball there’s a deterministic system. If I kick another living organism the system becomes nonde-terministic. Take the famous croquet game that Alice got involved in. The rules of the game of croquet are known And in so far as the humans who entered the frame of interaction called croquet agree to abide by these rules we have a deterministic system—that is, for any situation which can legitimately arise within the game there are specified procedures which determine the next move. There are different logical levels of rules. At the elementary level, certain elements of the game are identified as mobile—the croquet balls, the mallets, the players. Other elements are fixed—the stakes and hoops, the surface on which the entire game occurs … And, of course, more complex rules… If player A’s ball passes through hoop n prior to player B’s ball then a penalty pass is awarded to … But what was poor Alice to do when she found herself gripping a flamingo with which she was to strike a hedgehog? Energy in living systems has a different function and it’s called collateral energy. The distance the hedgehog rolls is simply not predictable from a measurement of the direction and energy with which Alice swings the flamingo!

This is the evident and final Solvent of the Knot Philosophical concerning Fate and Freewill, that it is thine own Self, omniscient and omnipotent, sublime in eternity, that first didst order the Course of thine own Orbit, so that the which befalleth thee by Fate is indeed the necessary Effect of thine own Will. These two, then, that like Gladiators have made War in Philosophy through these many Centuries, are One by the Love under Will which is the Law of Thelema. O my son, there is no Doubt that resolveth not in certainty and rapture at the touch of the Wand of our Law, an thou apply it with Wit. Do thou grow constantly in the Assimilation of the Law, and thou shalt be made perfect. Behold, there is a Pageant of Triumph as each star, free from Confusion, sweepeth free in his right Orbit; all Heaven acclaimeth thee as thou goest, transcendental in Joy and in Splendour; and thy Light is as a Beacon to them that wander afar, strayed in the Night.
Amoun.